The history of incense and why it’s used at Mass

This fragrant element of our Catholic heritage dates to millennia before Christ.

For me, there is something about the smell of freshly burned incense filling the church that is spiritually uplifting. But where did it come from and why do we use it? 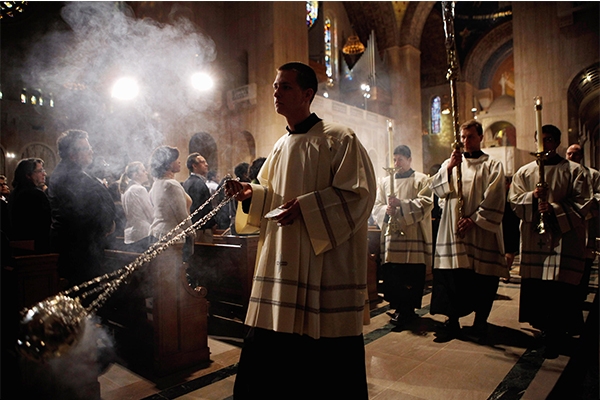 The use of incense in religious worship started more than 2,000 years before Christianity even began. The use of incense in China is documented before 2000 BC. Trade in incense and spices was a major economic factor between east and west when caravans traveled the Middle Eastern Incense Route from Yemen through Saudi Arabia. The route ended in Israel and it was here that it was introduced to the Roman Empire.

Religions in the western world have long used incense in their ceremonies. Incense is noted in the Talmud and is mentioned 170 times in the Bible. (e.g., Exodus 30: 1): “For burning incense you shall make an altar of acacia wood …”

The use of incense in Jewish worship continued long after the beginning of Christianity and was a definite influence in the Catholic Church’s use of it in liturgical celebrations. The Church sees the burning of incense as an image of the prayers of the faithful rising to heaven. The symbolism is mentioned in Psalm 141:2: “Let my prayer be incense before you; my uplifted hands an evening offering.”

There is no specific time frame recorded to let us know when incense was introduced into the religious services of the Church. No evidence is available to show its use during the first four centuries of the Church. But there are references of it being used in the New Testament. Luke, in the beginning of his Gospel, speaking about the birth of John the Baptist, writes:"Then, when the whole assembly of people were praying outside at the hour of the incense offering, the angel of the Lord appeared to him standing at the right of the altar of incense. Zechariah was troubled by what he saw and fear came upon him"

Incense is a sacramental, used to sanctify, bless, and venerate. The smoke from the incense is symbolic of the mystery of God Himself. As it rises upward the imagery and smell convey the sweetness of Our Lord’s presence and it reinforces how the Mass is linked to Heaven and Earth, ending in the very presence of God.

The smoke also symbolizes the intense faith that should fill us and the fragrance is representative of Christian virtue.

The GIRM (General Instruction of the Roman Missal) permits the use of incense at several times during the Mass. When something is incensed, the censer (thurible) is swung three times, which represents the Three Persons of the Blessed Trinity.
There are different times during the Mass that incense may be used.

In addition, incense is used at funerals both in the church at the casket and at the cemetery. It is used on Holy Thursday as the Blessed Sacrament is put in repose. And during the Easter Vigil, five grains of incense are placed into the Paschal Candle.

Finally, let us go to the Book of Revelation 8:3-4:
Another angel came and stood at the altar, holding a gold censer (thurible). He was given a great quantity of incense to offer, along with the prayers of all the holy ones on the gold altar which was before the throne. The smoke of the incense along with the prayers of the holy ones went up before God from the hand of the angel.

Yes, the use of incense is deeply rooted in our Catholic heritage.